The energy transition to a low carbon economy is required to meet the goals established in the Paris Agreement, mitigate climate impacts and maintain the Earth’s rise in temperature under 2ºC, but it brings different challenges for each sector.

The use of low carbon footprint biofuels contributes and plays an important role in this transition, particularly in the transportation sector, but also potentially in other areas, such as the industrial sector.

The carbon footprint of a product, also known as carbon intensity (CI), is the accounting/balance of greenhouse gases emitted and captured during its production process and use/consumption, in addition to the reuse and/or recycling process for certain products.

At FS, the commitment to produce low-carbon biofuel is already a reality. We use second-crop corn, which is grown without competing with other crops and with no marginal use of land. Favorable climatic and soil conditions in Mato Grosso allow producers to intersperse corn and soybean crops during the same harvest season and in the same planting area, without the need for new ones.

We use biomass as our only source of energy at our plants, deriving mainly from planted eucalyptus forests, but also from other types of materials, such as bamboo, cotton ratoons, açaí seeds, sawmill residues, sawdust, sugarcane bagasse and rice bark.

Reducing the carbon footprint of FS’ products is a commitment we made and has been consolidated through several initiatives, such as Renovabio, discussions with CARB, and the implementation of the BECCS (Bioenergy Carbon Capture and Storage) system.

In 2022, through Renovabio, FS has already sold 441,000 CBios credits, consolidating the carbon agenda as an important topic for the Company.

Our business promotes the integration between farming and industry, strengthening a more sustainable production system, from an environmental and socioeconomic perspective, and producing fuel with one of the lowest carbon footprints, according to the Renovabio certification.

We understand carbon has substantial value for the Company and therefore currently monetize its contribution by issuing CBios through the Renovabio program. We also contribute to the mitigation of CO2 emission by reducing emissions from combustion vehicles through the substitution of fossil fuels.

Currently, our Lucas do Rio Verde plant has the largest NEAA in the Renovabio program, ranking us first place in a program with over 200 plants. As a result, our ethanol production has contributed by reducing 491,000 tCO2 since 2019, corresponding to the removal of 486,000 cars in the city of São Paulo, or the conservation of over 1,000 hectares of native forests. 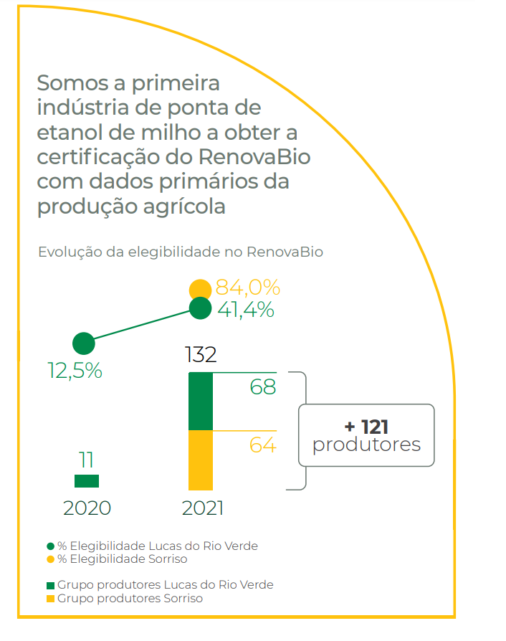 Carbon Capture and Storage (CCS) is a way to remove CO2 from the atmosphere and store it in geological reserves. This contributes to reducing carbon in the atmosphere.

FS has been developing feasibility studies and basic engineering to prove the feasibility of a project of this nature for its implementation. When a CCS is coupled to a bioenergy plant, BECCS (Bioenergy Carbon Capture and Storage) is achieved. In the BECCS system, carbon emitted derives from the fermentation of renewable raw materials, in other words, it comes from a biogenic cycle and therefore does not add additional carbon emissions from fossil inventory. This way, CCS coupled to a bioenergy plant can achieve negative carbon intensities.

The CO2 captured in the BECCS system may have its carbon credits used to offset the reduction in emissions required by other companies.